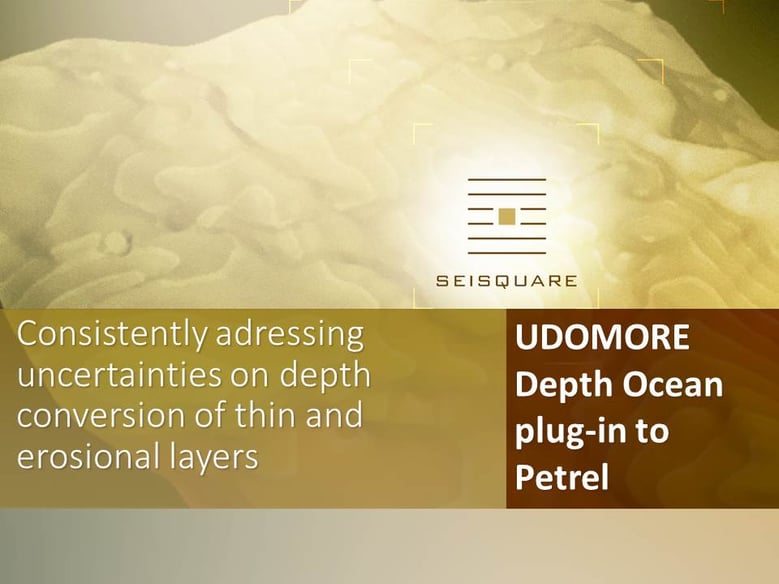 This paper focuses on a complex geological environment with a thin reservoir layer eroded by an unconformable seal rock as illustrated below: 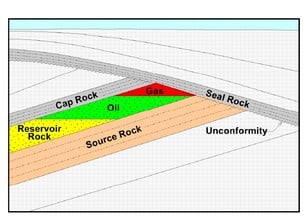 The case study is based on a synthetic data set: four time interpreted horizons (with a thin layer located in the middle); the top horizon is erosional and all layers have a constant velocity: 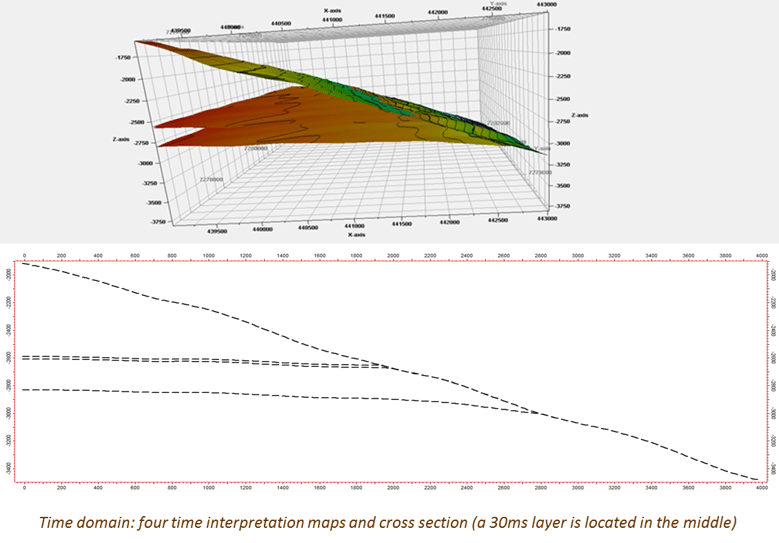 The problem with thin layers:

When performing time interpretation, errors are always made. In the context of thin layers, errors which may occur on the top horizon propagate to the bottom horizon. Uncertainties on time interpretations must be consistently handled within the depth conversion process to avoid any unrealistic thinning/thickening of the layer or even crossing of top and bottom horizons in the depth domain. 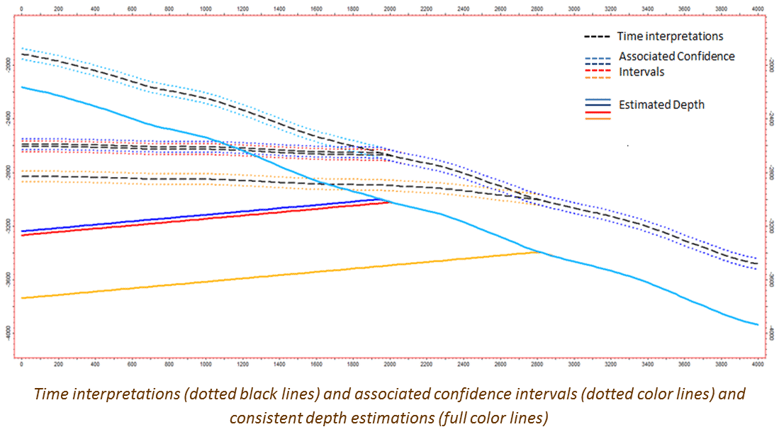 The problem with erosional layers:

An erosional pinch-out is interpreted in the time domain at a given (fixed) location in space. The issue is that no matter how much confidence there is on the interpretation of the erosional layers, there is always a margin of error on time interpretations that needs to be addressed when performing depth conversion. Indeed, there is no indication from a geological standpoint that the pinch-out should be considered as a fixed location in space in the depth conversion process. On the contrary, the location of the pinch out in the depth domain is not precisely known and depends on the uncertainties attached to the time interpretations. 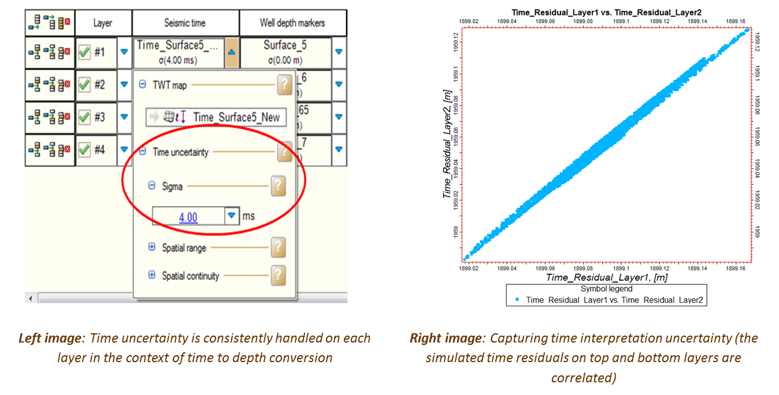 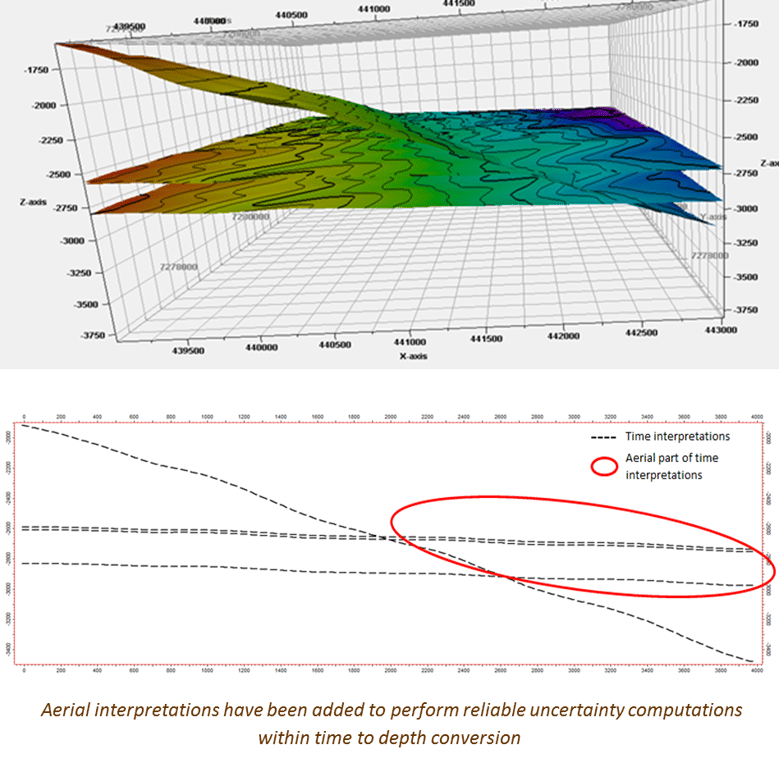 Adopting the UDOMORE multilayer depth conversion approach with consistent characterization of uncertainty on time interpretations has a critical impact on GRV computations and E&P decision-making. The example below shows a benchmark based on 300 depth simulations (with a fixed water contact at -3,550 m): the target area is defined in red. 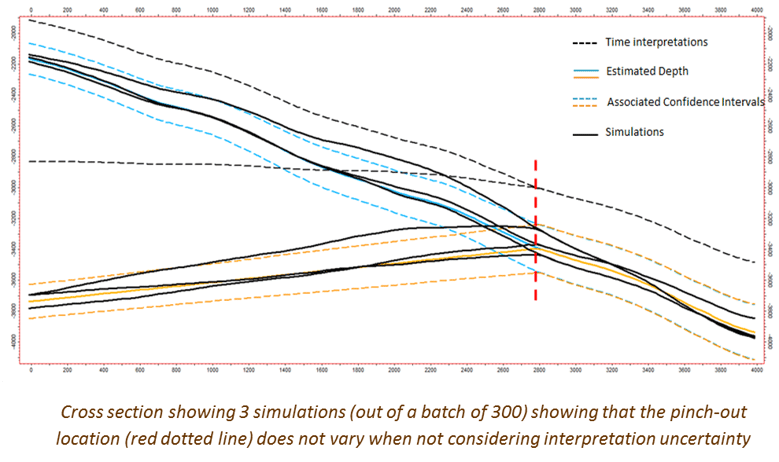 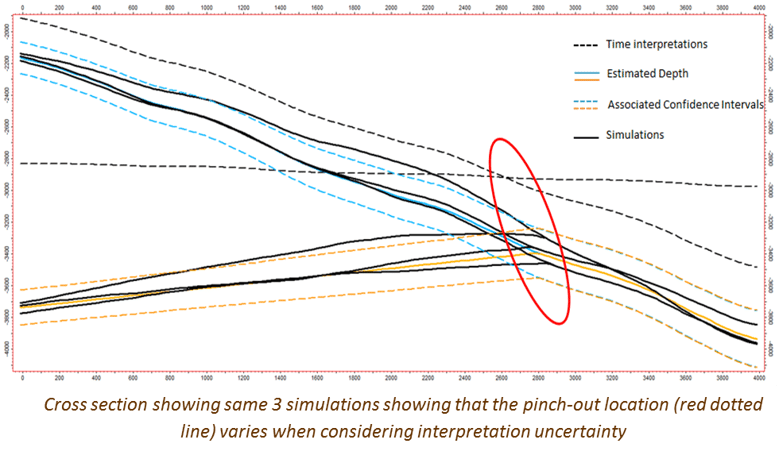 The GRV P50 case is equivalent for both scenarios: this is consistent with the vertical depth conversion of the pinch out (fixed location) interpretation in the time domain.

On the contrary, P10 and P90 GRV values are different and show that there is a 6% dispersion increase when considering interpretation uncertainty with UDOMORE Depth approach, making it a more realistic P10 P90 volume estimation.

Using the UDOMORE approach, interpretations of complex geological environments may be consistently depth converted without building time consuming 3D geological models. The output depth/velocity models and associated volume estimations are recognized for their accuracy, better consistency through time, and are easy to update as new data come in. This framework is made seamlessly accessible to users thanks to Seisquare’s UDOMORE Depth Ocean plug-in to Petrel. For additional information and a demo, contact seisquare@seisquare.com.

Seisquare applies geostatistical techniques to rapidly characterize uncertainties throughout G&G workflows in Petrel. This results in probalistic estimates of the subsurface that our customers use to improve E&P decisions linked to wellbore placement.